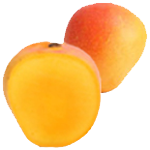 Fibreless, extremely fragrant, delicious- everything you did not know even existed in a fruit. Yummy, sensitive and temperamental, it is said that every person in the Alphonso belt has a secret desire to taste at least one Ratnagiri-Devgad Alphonso in a season- otherwise what is life worth living for!!

Alphonso is also grown in other regions of India, such as Karnataka. Farmers in the US, Mexico and South America have also tried to grow the fruit, with varying degrees of success. However it is extremely temperamental and sensitive to the weather. Some say it is called the King because of its temperamental nature. Despite all this, this is our top selling mango every season and beats every mango hands down.

The first flowering of Alphonso mangoes generally matures in February and the second flowering is generally ready in April.

Its peak season is from mid-April to mid-May. We get most of our supply of Alphonso mangoes from top orchards in Ratnagiri and Devgad.